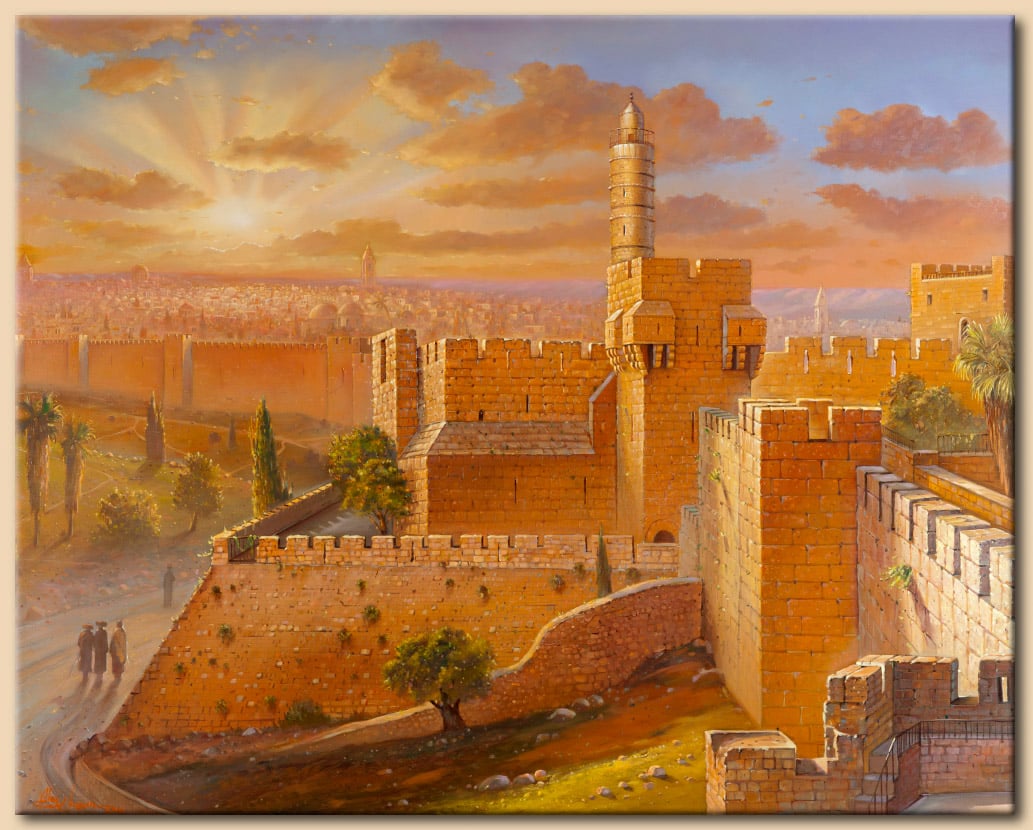 The painting by Alex Levin called ‘Migdal David morning Glow’ is very unusual in many respects. There is no square at the Kotel in the Old City of Jerusalem on it – the main hero in Alex’s paintings. There is another object on it which has long since turned into a tourist symbol of the Israel’s capital.

In truth, according to the majority of expert historians, the Tower of David has little to do with the king himself. In fact, in question here is a minaret belonging to Osmanian period though inn in the historic-archeological complex of the Tower of David there are well preserved buildings related to all periods of Jerusalem’s existence. The City that namely King David made the capital of Israel… Perhaps here lies the main peculiarity of Jerusalem – the City of Heaven and Earth that throughout several thousand years absorbed the history of dozens of peoples and cultures. But still the Holy Town has the dominating Jewish constant even in parts of it where different epochs are interwoven.

This painting by Alex Levin helps to almost physically feel the sense of words “Golden Jerusalem”. With gilded fog saturated are the air, the walls of the Old City and of course, the cypresses and olive trees. One can see that the sunshine has not broken through the morning clouds yet but it’s appearance above the horizon has already notified the Jews of the time for morning prayer (Shacharit). This moment cannot be missed – otherwise, the energy which fills the morning air will dissolve until next dawn.

But the people pictured on this masterpiece don’t seem to be in a rush. They are a part of Jerusalem’s unique atmosphere, they are included in it for good. And this is the contest in which the legend of the Wandering Jew acquires new meaning… In principle, any correlation in time among this work and other paintings by Alex Levin is pretty conditional – that is the way the fortress walls of the Holy City looked like today and many years ago. Jerusalem existed and will exist beyond the concept of time – like the Jews themselves who were called the symbol of eternity by philosophers and writers of different epochs and countries.

Alexander Riman
Researcher of the Jewish Heritage and Journalist, Israel