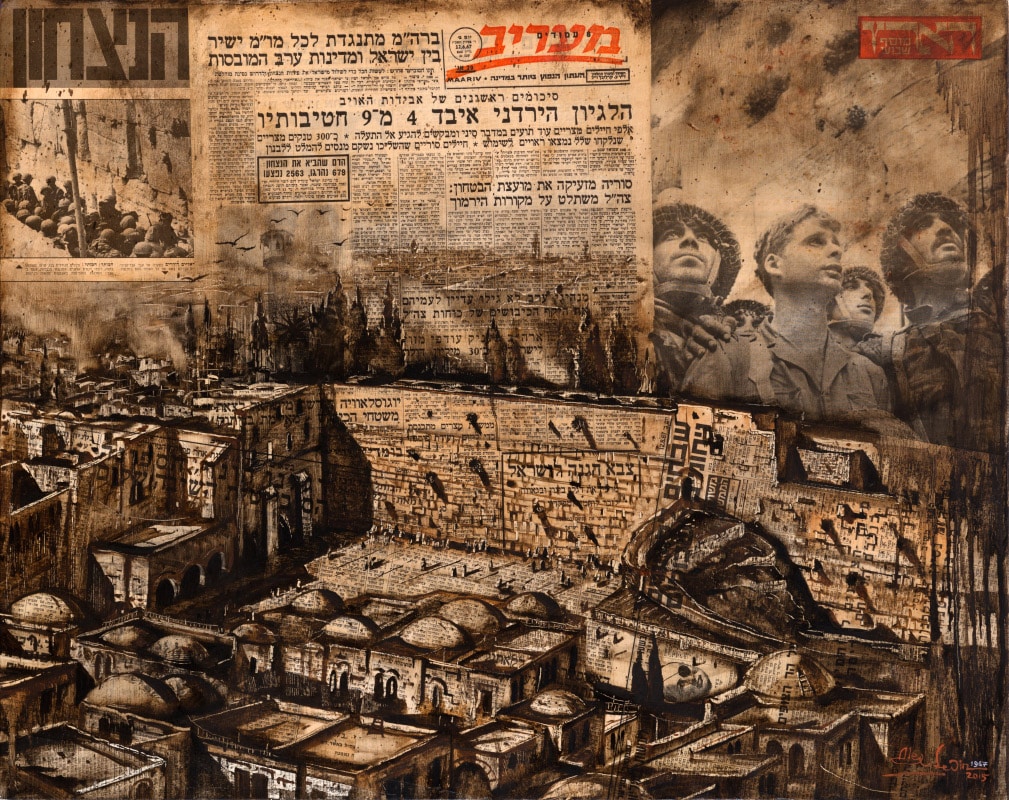 Alex Levin’s new series of paintings is devoted to theme of Zionism and the State of Israel. This is the most unfashionable topic in the modern Israel for artists, and for some – even forbidden and shameful.

But Alex Levin never followed fashion trends, an attitude that had often led to serious issues with the ‘politically correct’ establishment, like the incident with the absence of mosques on the Temple Mount.

This time the Jewish artist decided to go against the international, political and diplomatic mainstream that still refuses to acknowledge the status of historical Jerusalem as a Jewish city – the eternal and undivided capital of the Jewish people.

His new masterpieces are painted over antique newspapers that have documented the atmosphere of that era, the spirit of freedom and uncompromisingness of small Israel that bravely challenged the armies of the Arab countries. The armies that were supplied with the newest weapons by the mighty Soviet Union.

Every painting is an individual scenario, although together they constitute the textbook of events half a century old.

For example, the painting “The Victory of 1967” includes an excerpt from the newspaper ‘Maariv’ with an article on the losses of the Arab legion – the main fighting force of the army of Jordan.

The Arab legion managed to force the Jews out of the Old City in 1948, blocked the road from the Maritime Plain to Jerusalem, and destroyed the Gush Etzion settlements that were restored after the Six-Day War.

In 1967, victory was achieved at a high cost. Hundreds of Israeli soldiers were killed and wounded in the battle of Ammunition Hill (Givat Hatachmoshet), which was a key point in the battles for the liberation of Jerusalem.

But this war was not the last. The painting “Year of 1973” reminds us of the heavy losses of the Israeli defense army in the war that began on Yom Kippur. Exactly on this day in 1941 Hitler’s forces began massacres at Babiy Yar in Kiev – the city from which Alex had repatriated with his parents and brothers.

At the center of the painting of the “Yom Kippur War” is soldier boots, background is a newspaper article about heavy fighting in the Suez Canal area.

You can find the similarity of this picture with the canvas of Alex dedicated to the Holocaust. But they do have a fundamental difference. Today, the Israelis can protect themselves with weapons, and the slogan “Never Again!” is not an empty phrase.

The portrait of the first Israeli Prime Minister – David Ben Gurion – is the centerpiece for the painting “Zionists proclaim new state of Israel”.

The newspaper in the background is an article from the New York Times, emphasizing the undeniable fact that the creation of the Jewish State was an international event.

Only a few weeks prior to the retreat of the British army from mandated Palestine, President Truman, leader of an all-powerful nuclear country, provided Ben Gurion with an ultimatum, demanding not to proclaim the Jewish State mid-May due to the ‘complex international situation’.

But David Ben Gurion found the strength to resist this diktat and did exactly what millions of Jews around the world expected from him. And he proved that he is true leader with an iron will, such as Moses and other Jewish leaders of different eras.

On the painting ” Paratroopers by the Wailing Wall ” portraits of three soldiers stand out, which resemble the three patriarchs of the Jewish people – Abraham, Isaac and Jacob.

Their faces are painted over the trade-union (left Zionist movement) newspaper – ‘Davar’ – that described the then-current problems in Jerusalem and emphasized the continuity of Jewish history in all its aspects – military, religious, political and domestic. And all this – one city, one fate of all its inhabitants – in the past, present and future.

Alex Levin’s monotonous and ‘documentary’ paintings on this topic are sharply contrasted by the painting “Paratrooper Brigade of 1967 and 2017”, which depicts modern soldiers in bright light of a sunny day – against the backdrop of images of their grandfathers who won the victory in 67.

The first title of ‘Davar’ in this painting’s background states: “Prime Minister Levi Eshkol in Knesset: There will be no concessions.”

Another headline on the same page: ‘Any obstruction of Israeli vessels will entail the most serious consequences’. …This is already about the blockade of the military ships of Egyptian President Nasser.

Eshkol did not limit himself to the threat, and on June 5, 1967 Israel began a preventive, defensive war, and not aggression, as the naval-military blockade was a “casus belli” – a declaration of war.

Such were the Israeli leaders and soldiers half a century ago. Only such politics and unity is the guarantee of the existence of the Jewish state.

Alex Levin – a repatriated Israeli artist – is a Jew and Zionist, who had served in the Israeli Army tank troops on the Golan Heights doesn’t hesitate to talk about it in full voice.

Because it is impossible to live in a country that can not be proud of!

Another theme of Alex Levin’s paintings is the nature of the Land of Israel. In the “military series” palms and bright flowers have disappeared, we see cacti and a thistle.

In the painting “The Battle of the Golan Heights”, bushes of thorny flowers resemble the “horns” of sea mines, which suddenly found themselves on land and turned into anti-tank mines.

It was the Golan Heights in 1973 that became the site of the bloodiest battle of the armored divisions of the armies of Israel and Syria.

The military theme is also emphasized by newspaper pages, including the quote from an article in the New York Times. It is dedicated to the war for the Independence of Israel in 1948 and the appointment of the great chemist Chaim Weizmann as the first president of the Jewish state.

Bright colors and a discreet color palette are what makes Alex Levin’s painting ‘Tzabar’ so unique. Tzabar is Hebrew word for ‘cactus’, as well as an Israelis native of the country. Cactuses seem to sprout thru newspaper articles with maps of Eretz Israel, including those that do not correspond to the current borders of the state of Israel.

But the artist sees in his own way both the history and the modernity of the Jewish state, which he has repeatedly proved while painting the Temple Mount in Jerusalem.

Alex sees all this, first and foremost, from the Torah’s point of view. The Book of Eternity.

A cactus has incredible vitality, capable of surviving through difficult times, and it is impossible to deprive it of its native soil. Much like the Jewish people in the State of Israel.

It is also worth highlighting the work of modern Tel Aviv and the young people that has the right to live and be proud of their country and their roots. The artist combines the past, present and future with the help of old newspapers dating back to 1953.

We will never build a future without knowing and respecting our past.

By presenting this unique series of paintings, Alex Levin prolongs the life of these antique newspapers from the previous century, giving them new meaning and life for centuries to come.

Alexander Riman
Researcher of the Jewish Heritage and Journalist, Israel