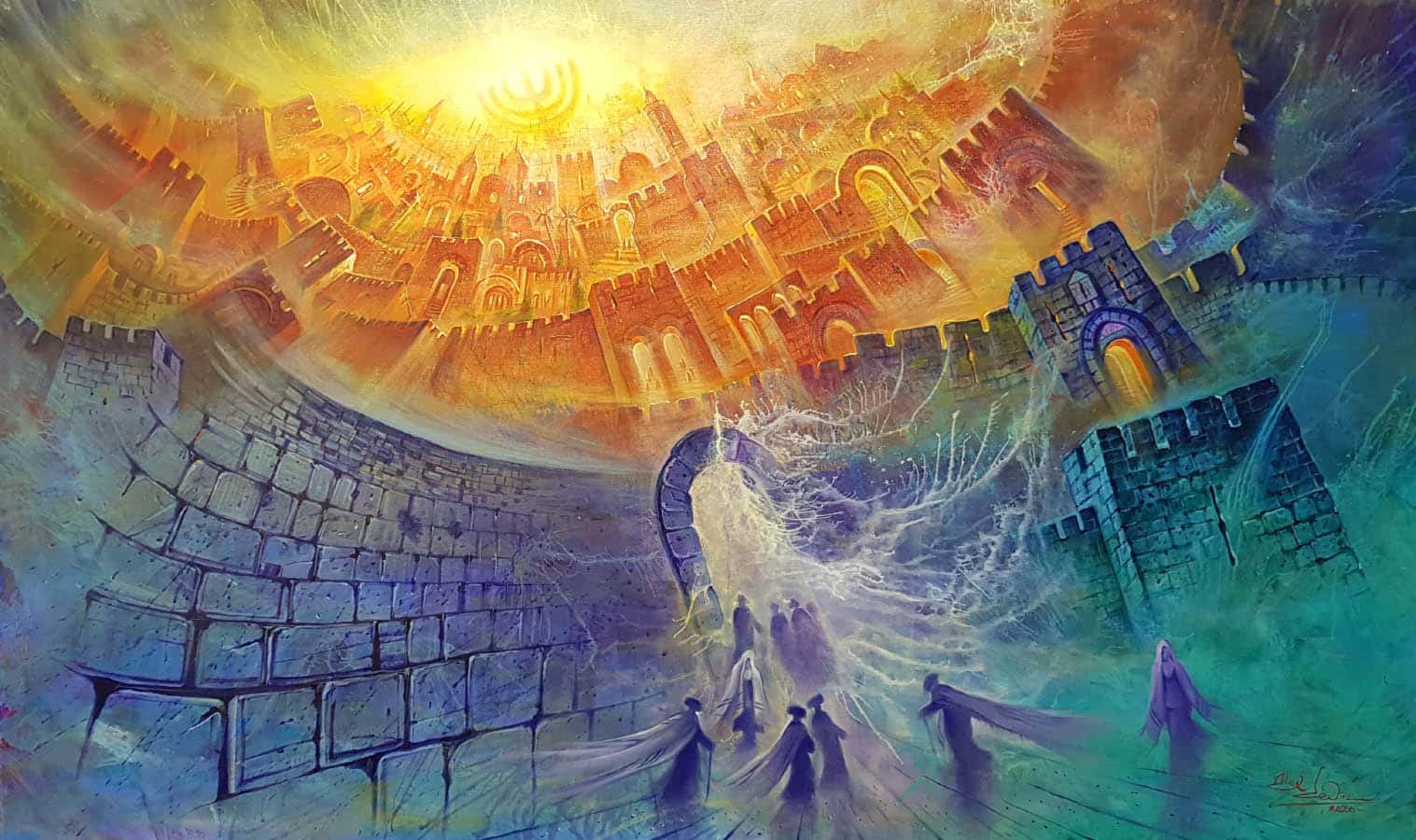 Jerusalem is located in the Judean mountains, so they do not just go there, but “ascend”. The Hebrew word that describes this ascent or rise is Aliyah. The same word sounds in the synagogue when someone is called upon to “ascend” to a special exaltation, podium, and to participate in the reading of the Torah. But this is not all, since Aliyah is the exaltation and purification of the soul. And finally, if a Jew living outside of Israel decides to return to the homeland of his ancestors, he “makes Aliyah”. Thus, the use of the word “Aliya” in connection with Jerusalem suggests how deeply the Jews honor this holy city, and inside the city – the Western Wall. Many believe that it is there, in the most sacred place of the holy city, that the presence of God is most tangible.
According to Jewish legends, there is not only earthly Jerusalem, but also a city on the clouds. And in this heavenly Jerusalem rises the very Temple that was destroyed many centuries ago. Many Jewish traditions have a plot related to a trip to paradise, where the Eternal City is located. It is believed that Enoch, son of Cain, was the first to get there, and the prophet Elijah ascended there on a fiery chariot. According to these tales, one can see how much people wanted to be closer to God, which, as you know, lives in heaven.

King David was the first to build the Temple. At night, he dreamed that he was climbing the stairs of Jacob, connecting earth and heaven, and was at the walls of heavenly Jerusalem. After all, it exists, Jerusalem in heaven, and in it, as in a mirror, Jerusalem on earth is displayed.
However, there was a difference in this mirror image: the Temple has stood in heaven since the beginning of time, but it was not on the earth. Shocked, King David examined the Temple in a dream from all sides, examined every room, touched every stone. And waking up, he wrote down everything that he remembered, in all details, because he wanted to build exactly the same Temple in earthly Jerusalem.
Before his death, King David managed to prepare only the foundation for the Temple, then his son Solomon continued the construction. After becoming king, he gathered all the Jerusalemites – both the poor and the rich, and the nobility, and priests.

“People of Israel! Let’s build a magnificent Temple in Jerusalem for the glory of God, in Jerusalem” he suggested.

“This temple will become a holy place for all people, therefore we will build it with the whole world. Let the lot decide who builds which wall.”

The Western – Wailing Wall wall still stands today and dew drops glisten on its stones in the morning. They say that the Wall all night pours tears over the ruined Temple.
Everyone who has visited the Wailing Wall will confirm: God is somewhere out there, very close.

In the new painting by Alex Levin, we can see the connection between the two Jerusalem of heaven and earth, with the help of Light and color, amazing colors the artist conveys the unique image of the divine Jerusalem. This contemporary Jerusalem painting is written so that we can see Jerusalem from its Shrine of the Wailing Wall, climb up through its streets and stairs and in the end we can touch the eternal heavenly Jerusalem. Israeli artist Alex Levin makes an amazing stretch of colors in his modern painting in warm colors, he opens the Heaven, the Temple, the Menorah, and in the colder tones, modern city and the prayers of the Jews. This modern Jerusalem Painting begins with the gates into which the Jews enter to pray and also that the time will come and the Third Jerusalem Temple will be rebuilt. What is good about this abstract painting is that you can tell the story of millennia in one small artwork.